A Brief History of Telepsychiatry 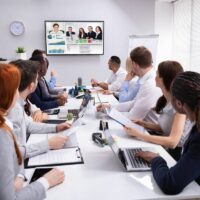 It may surprise people, even healthcare practitioners, to learn that telepsychiatry has been around in one form or another for over 60 years. It has been gaining prominence since the 1990s and, over the last two decades, has fully earned the acceptance of the medical community. Read on for a brief history of telepsychiatry and how it has contributed to the evolution of modern medicine.

Between 1957 and 1959, the Nebraska Psychiatric Institute developed and began utilizing early video conferencing to provide group therapy, long-term therapy, and consultation-liaison psychiatry, as well as to train medical students. By 1969, clinicians at Massachusetts General Hospital were performing psychiatric consultations at a Logan International Airport healthcare clinic. During the 1970s-1980s, telepsychiatry became increasingly common, expanding to many diagnostic and therapeutic interactions.

In 1988, a massive 6.8 earthquake struck Armenia. The “Spitak” earthquake killed between 25,000 and 50,000 people and injured as many as 130,000 more. The disaster completely upended the local healthcare infrastructure in the Spitak region of Armenia.

In 1989, the United States teamed up with the Soviet Union to form a collaboration called the NASA Telemedicine Spacebridge. The agreement was formed under the already existing bilateral Space Agreement between the U.S. and the U.S.S.R. The aim of the Spacebridge was to bring expert medical consultation to Armenian medical personnel, specifically in the areas of plastic and reconstructive surgery, physical and psychological rehabilitation, public health, and epidemiology. For three months, hundreds of Armenian, Russian, and American medical professionals from at least 20 specialty areas participated in 34 clinical conferences held remotely.

The experiment represented the first large-scale use of telemedicine to respond to a natural disaster, an international sharing of medical expertise that transcended cultural and political borders. As we have discussed before, this was just the first.

The 1990s Expansion and the Internet

In the 1990s, the regular use of telepsychiatry expanded across the world, becoming especially widely used in Australia. Researchers worldwide began to conduct studies to establish the efficacy of telepsychiatric care and appreciate its ability to transcend political and geographic obstacles.

As the internet was established, privatized, and began to grow, services like Prodigy and American Online helped more people gain access to telemedicine psychiatric care.

By the early 2000s, research had established that telemedicine could be equally as effective as, if different than, traditional evaluation, diagnosis, consultation, and treatment. Practice guidelines were established by healthcare organizations and regulatory agencies and issued for the use of telemedicine and telepsychiatry. Several large-scale studies conclusively established that telepsychiatry was just as effective as in-person treatments in terms of diagnostic accuracy, treatment effectiveness, and patient satisfaction, while simultaneously saving time, money, and effort.

In the last five years, organizations such as the American Psychiatric Association have issued educational materials and other resources concerning the practice, research, and policy implications of telepsychiatry. There is now a firmly established APA Committee on Telepsychiatry.  The Interstate Medical Licensure Compact (IMLC) is gaining strength and facilitates licensure for qualified physicians looking to practice across state lines. Telepsychiatry is now a firmly-established and accepted avenue for psychiatric care, with governmental and medical associational support for its rapid expansion and facilitation.

If you are a healthcare provider in need of qualified, efficient, and effective mental health services, or if you are a licensed psychiatrist interested in expanding your practice to telepsychiatry, reach out to Orbit Health to discuss your options for telepsychiatry today.