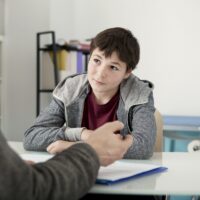 Historically, few mental health resources were devoted to child development. Antisocial or delinquent behaviors were punished, including by way of juvenile detention, but the underlying causes of delinquent behavior were not properly investigated. In essence, society has been fine with treating the symptom, but not the cause. The result is an ever-increasing population of incarcerated youths and adults, and a lack of effort spent on trying to stop crime before it starts. Recent studies have shown that early intervention programs can treat antisocial disorders before they manifest into delinquent behavior, and that these programs are likely to be far more effective at reducing recidivism than arresting young offenders.

Research conducted to date has shown that children are not born into an inevitable path toward criminality, nor is it commonly a feature of random chance. Rather, children and youth are introduced to a path toward delinquency at some point. Studies indicate that there are typically two pathways to childhood delinquency: children in whom antisocial behavior begins in early childhood, and children who develop antisocial tendencies upon entering into early adolescence.

Regardless of at which stage a child begins acting out, the conclusion is that child delinquency is not an inevitability. When communities, families, systems, and qualified professionals are given the chance to intervene, they can mitigate the antisocial tendencies of children and significantly reduce the likelihood that they will wind up incarcerated as a minor or as an adult. It is important for intervention to begin as early as possible, however. Once antisocial behavior is ingrained in a child, it is significantly more difficult to resolve.

The research flies in the face of traditional approaches that focus on punishing or remediating preexisting and longstanding disruptive behaviors, indicating that such efforts are more likely to be “too little too late.” Instead, employing early intervention programs that preempt the onset of delinquent behavior can stop the problem before it starts and put at-risk children on the path toward a lawful and productive adulthood.

Early intervention programs not only can save young lives from being wasted but can also prevent the onset of adult criminality, reducing the likelihood that the child will engage in more serious and violent behaviors later on, and reduce the chance that they will spend time incarcerated where their antisocial tendencies are only likely to grow. These programs help young people avoid antisocial tendencies and criminality and help the rest of society by reducing the incidence of crime, the cost of incarceration, and the fallout from lives lost to a criminal and/or antisocial lifestyle.

As explained by youth.gov, programs that aim to act as early as possible and focus on known risk factors in juveniles are much more likely to curb and prevent later delinquent behavior. School and community programs can be very effective, including bullying prevention programs, classroom and behavior management programs, afterschool recreation programs, mentoring programs, and conflict resolution and violence prevention curriculums at schools. Mental health is an essential factor in the development of youth, and it has been overlooked for far too long.

If you are a school, juvenile detention center, or a healthcare provider or employer that would benefit from a variety of qualified, professional, and efficient psychiatric care specialists, reach out to Orbit Health to discuss your options for telepsychiatry today.