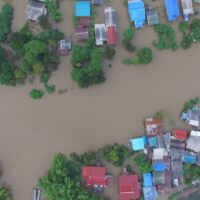 Telepsychiatry and other forms of telemedicine allow healthcare professionals to provide much-needed medicinal services to areas that would otherwise lack essential treatment. While telepsychiatry is useful for providing qualified psychiatric care to people in rural or otherwise hard-to-access communities, it can be of vital importance in situations where travel and infrastructure are limited because of a natural disaster. Telemedicine has been used at multiple points in the past when the impacts of disasters have threatened to isolate and separate groups in danger, as a means to strengthen and support struggling healthcare systems and social fabric generally. Telepsychiatry is an invaluable resource during and after these events and should be considered a first-line tool whenever a disaster causes problems with medical infrastructure or availability.

Quarantines and lockdowns meant to limit the spread of the novel coronavirus, as well as the devastation caused by the illness itself, are creating hardships around the country and around the world, and telepsychiatry may provide an excellent solution, as it has during past events.

Telepsychiatry after the Armenian earthquake of 1988

In 1988, a massive 6.8 magnitude earthquake struck Armenia and became known as the Spitak earthquake. The shock occurred in the northern region of the country, then a part of the Soviet Union. Between 25,000 and 50,000 individuals were killed, and as many as 130,000 were injured. The entire local medical infrastructure in the Spitak region of Armenia was significantly damaged.

In 1989, in response to the disaster, the United States and the Soviet Union formed a collaboration known as the NASA Telemedicine Spacebridge to Armenia. The agreement was formed under the auspices of the existing bilateral Space Agreement between the U.S. and the U.S.S.R. The goal was to provide expert medical consultation to the Armenian medical personnel in the areas of plastic and reconstructive surgery, physical and psychological rehabilitation, public health, and epidemiology.

The Telemedicine Spacebridge represented the first time telehealth was used on a grand scale to assist in a natural disaster. For 12 weeks, 247 Armenian and Russian and 175 American medical professionals participated in 34 half-day clinical conferences. A total of 209 patients were discussed, requiring expertise in 20 specialty areas. Telemedicine consultations resulted in altered diagnoses for 54, new diagnostic studies for 70, altered diagnostic processes for 47, and modified treatment plans for 47 of 185 Armenian patients presented.

In short, hundreds of patients were helped by experts from other parts of the world, and existing tensions between the nations were set aside in the pursuit of proper healthcare for those in need. The Spacebridge was even extended to Ufa, Russia, in response to a second disaster. The collaboration kicked off a new wave of telemedicine that transcended cultural and political borders.

Telemedicine has been effectively utilized after disasters in the U.S. as well. In 2005, a category 5 tropical cyclone named Hurricane Katrina struck New Orleans and the surrounding areas in Louisiana, causing $125 billion in damage and over 1,200 deaths. Thousands of homes were destroyed, and many people were displaced. Thousands of people injured and experiencing a variety of physical and mental problems were unable to get in-person medical care due to the destruction of the hurricane.

Doctors who provided aid to the victims of Hurricane Katrina pointed to telemedicine as an invaluable resource for several years following the disaster. Groups of physicians set up telemedicine services to assist with diagnostics and prescribing treatments. For example, one ear, nose, and throat doctor described how nurse practitioners would insert video otoscopes in the patients’ ears and share the video with the doctor who was located several states away. The remote doctor would review the video, look for issues, and provide real-time feedback to the patients and the healthcare workers on-site who lacked the specific expertise. Patient surveys found that outcomes were comparable with in-person interactions, and patient satisfaction was often even a little higher.

These events demonstrate how telehealth can be used to ensure that disaster victims and others lacking services in times of regional or global hardship get the care and treatment they need. Specialists no longer need to be flown to particular locations when a videoconference can provide all the infrastructure necessary for diagnosis, prescription, and in the case of psychotherapy, even treatment. Moreover, cultural and regional differences can be simply sidestepped by bringing a physician from any locale to any other region. Expanded use of telepsychiatry and other telemedicine is exactly what we need to facilitate national and global cooperative efforts toward accomplishing a common healthcare goal.

If you are a healthcare provider or organization who would benefit from qualified, licensed, and economical psychiatric care, reach out to Orbit Health to discuss your options for telepsychiatry today.